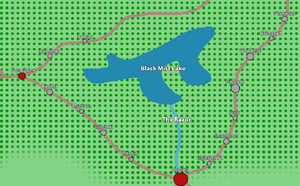 While revisiting the tomb of Mori in Week 33, Kralfort senses a dragon nearby.  The party discovers it to be at the bottom of the lake guarding the legendary sword Harbinger for which they were searching.  After a terrible battle, they retrieve the sword from the bottom of the lake, where it had likely been for ages.

Retrieved from "https://rollplaydnd.fandom.com/wiki/Black_Mist_Lake?oldid=12944"
Community content is available under CC-BY-SA unless otherwise noted.