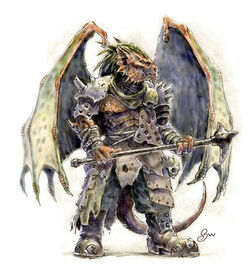 These dragon-men stand on two legs at the height of a human or taller and use weapons and armor.  They vary in size depending on sub-species. Most have wings but are incapable of flight and use them merely to glide or sprint along the ground.

They are the spawn of experiments on corrupted dragon's eggs.

These were the first draconians the party encountered, bearing bronze scales with dark-green tinges.  They were seen cohorting with hobgoblins in Week 26. They turn into stone upon death, which can trap the attacker's weapon until it turns to dust a few rounds later.

The Kapaks are beasts that coat their weapons in poisonous saliva before battle.  Upon death, it leaves behind a dangerous pool of acid. The party battled them in Week 27 alongside the Sivaks.

Fought in Week 27, these have the curious ability to shapeshift and exactly mimic the appearance of their enemy upon death, including armament. The effect lasts for 3 days before it turns to dust.  They tower above most enemies at 9' tall and can fly.

Retrieved from "https://rollplaydnd.fandom.com/wiki/Draconians?oldid=11731"
Community content is available under CC-BY-SA unless otherwise noted.